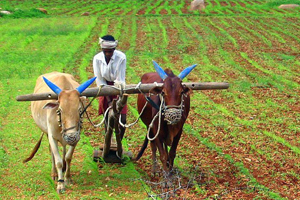 Agriculture continues to be the prime sector in India; in fact the backbone of the Indian economy.This sector is in grave need of a development path involving greater productivity growth across the entire agribusiness providing a solid foundation for rapid, inclusive economic growth and reduction in poverty. India’s population is estimated to touch 1.4 billion by 2020 and thus agricultural production target has to be achieved through sustained farming to support this huge number. According to studies on “Indian agricultural sector” by the Planners, agriculture needs to be revamped to meet future growing demand and nutritional security of this huge population. Next green revolution with a focus on holistic development of agri sector is imperative to support farmers in sustaining their livelihood.
About 70 per cent of the rural households and 8 per cent of urban households are still principally dependent on agriculture for employment. Therefore, adoption of better agricultural practices to improve productivity and production of quality crops per unit area per unit time is imperative to meet future production target in order to ensure nutritionally oriented cropping pattern. Further, more than 50% of the industrial raw materials are generated from the agriculture like jute, sugar, cotton, tobacco, paper, tea, coffee, food processing industries etc for which the quality of crop also matters. Despite these facts the agricultural productivity in India per hectare as well as per worker is the lowest in the world.

Agriculture is still the most significant sector even in a developed economies like U.S.A. and Europe, where the productivity and production of agricultural commodities (both food grains and commercial crops) have risen to such fantastic heights that they have become a granary for supplying food grains to countries like Russia, China and many developing countries in Asia, Africa and Latin America. And thus by far agriculture occupies a pivotal place in the national economy of any country without exception.

Since the major portion of arable land has already been exploited, very little scope exists for bringing new areas under cultivation. Consequently, this potential could be harnessed only through increase in production by higher cropping intensity and productivity of crops. And that means by increasing the cropping density and productivity per unit area per unit time. In this context, the Planners envisage the practice of intensive cultivation with fertilizer responsive high yielding variety Products .

Our agricultural production target has to be achieved through sustained farming practices:-
A yet another “turn” has taken place in today’s realm of green revolution. What it had been once about the livelihood of agriculturists is now the one focusing on holistic development of agri-sector. The current scenario is the one from ‘greater productivity’ towards ‘healthy productivity’.

To achieve a momentum in sustainable agriculture, balanced use of essential plant nutritional elements is as vital as mandatory. This necessitates the use of proper blend of all essential nutrients through integrated use of chemical fertilizers, manures, soil amendments etc. to maintain soil fertility and to sustain the tempo of growth for achieving agricultural production targets. But soil is seldom able to provide the required plant nutrients. Under intensive cropping, nutritional requirement of crops need to be properly satisfied as the soil nutrients are much more quickly depleted.

At the outset, in view of the growing future needs, Aristo Chemicals and Aromatics offer Water Soluble Fertilizers of various grades for use in modern farming in order to increase production and productivity of crops.